How to Make an Animated Cartoon? 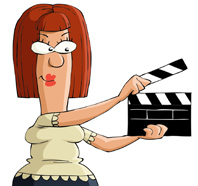 Presently, traditional animated cartoons are being progressively replaced by features made by digital means. We are not going to tell you that "analogue" films are better (some great films have been made with computers, and some horrible ones with traditional drawings) but it is true that old-style cartoons had a certain "something", a bit of artisanship, perchance, that loaded them with charm and mystery, even. So, how could drawn characters actually come to life? We are going to tell you the way it was usually done. Needless to say, this will be but a quick explanation (there are books upon books upon books dealing with the process) of the basic steps, but we still feel that it might be useful to you as an introduction to the subject.

First of all you need the story, and then you need to do the sketch of the "characters": these will give us the appearance of the characters both at rest and in motion or gesturing, to give us an idea of their factions and attire.

After that you need to produce the story board. This is something along the lines of a rough script: with basic drawings you indicate what character appears on what scene, what is the character doing, what are the surroundings and to which scene does the setting relate. This tool is also commonly used in real-life motion pictures.

The next step is the most beautiful, but also the toughest one. The cartoonists (generally, there are quite a lot of them) draw what will ultimately be shown on the screen. Some deal with given characters, others deal with the rest and others still are put in charge of the setting. Why the distinction? Think about it: usually the setting is static, while the characters move. Therefore, the characters are usually drawn on a transparent paper, such that the same surroundings can be used when the character gesticulates or changes the expression in her face (each expression entails many drawings, approximately 24 for every second it lasts)... Imagine how many backgrounds would be needed just to make our hero move her arm!

Each variation of the drawing is photographed on cinematographic film. This is hard to explain but let's give you a rather simple example: have you seen one of those notebooks with a drawing on each page which seemingly comes to life when the pages are flipped in quick succession? Well, deep down, the process is the same as this, except it is a bit more complex.

These days computers are also used to finalise movies made with traditional drawings (it saves a few steps and it makes some of the processes far simpler), especially when there are many scenes that involve much motion.

Obviously, there are many more things to say about this subject. We have only touched upon the basic points. But if you like the world of cartoons, we encourage you to look further into it in books and even Youtube videos, where the whole creative process is explained. We hope you learn much!

How can we help you?Speak with an advisor for personalized attention
Receive Information
“January Joke”
Milk
[Read joke]