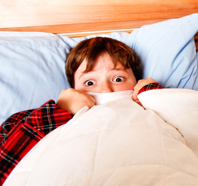 It's possible that one day our child won't want to go to sleep and that he or she wakes up at night screaming. When this happens it's likely that the child is experiencing fear of the dark (which we spoke about in August) or night terrors.

It's necessary to distinguish it from others: while fear of the dark is centred on one element and in what could be lurking there, night terrors are a little more complex. They manifest when after a few hours of sleep the child wakes up screaming. We may think it's a recurrent nightmare, but he doesn't remember anything.

If, it is in fact ¿night terrors¿ nightmares don't necessarily have anything to do with it. According to the specialists, these terrors are produced by hyperactivation of the central nervous system in the transition between the deepest sleep (not REM) to the more superficial REM phase. This hyperactivation provokes an abrupt awakening.

These terrors occur in 8% of children and are usually manifest between the ages of 4 and 12. In most cases there is a relative who suffered the same disorder, although there are external factors that favour their appearance such as stress, moving houses and to a lesser extent as a side effect of some medicine.

Given the nature of night terrors, it's extremely important to contact the paediatrician if we think our child might suffer from the disorder. But we can also help to make the situation more bearable making sure the child sleeps well and help to reduce his anxieties or establish a routine that make him feel safe when sleeping.

We must never forget that we are parents before all else, and as well as protection, he will expect solace from us.