A cat in Paris 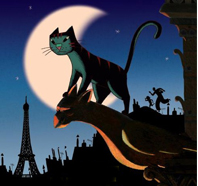 Whoever owns a cat knows that they are mysterious, and we could even say they lead a double life: the one they share with us at home and the life they have when they go out the window or cat flap.

This is exactly what happens to the movie's main character, Dino: during the day he is a little girl, Zoe's pet but when the night comes he becomes Nico's companion, a thief that "works" on the roofs of Paris.

The curious thing is that Jeanne, Zoe's mother, is a police deputy who, as well as being after Nico, has to deal with the evil Victor Costa. So up till a certain point it's normal that the lives of all of them will intersect with Dino at the very centre.

This film, filled with intrigues and pursuits, takes place in Paris, a city curiously known for an old café called "Black Cat" (Chat Noir). Is there a better place for having adventures?