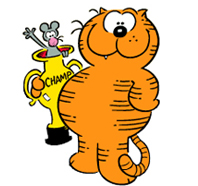 Heathcliff is a very clever fat orange cat with tiger-like stripes. Ring any bells? We could say that our character of the month is sort of copied from another famous cat: Garfield. But we have to be careful with this statement. Garfield was born in 1978 and Heathcliff was created 5 years earlier. Of course, this is a sore subject for fans of one feline or the other, and it causes heated arguments.

Let's just say Heathcliff and Garfield are that sort of cousins that only share the hair colour, as they are quite different: while Garfield is lazy and sleeps most of the time, Heathcliff is much more active and mischievous.

As we said, Heathcliff was born in 1973, created by cartoonist George Gately Gallagher. Even though he became famous in the late 1980's when his cartoons were published in countless newspapers and then the TV series that we all remember was made. In fact, and this is one of the arguments offered by Garfield fans, we could say that Heathcliff was truly "born for the audiences" in 1988. In the beginning he didn't talk (in the cartoons a phrase would be printed underneath the drawing explaining the scene, it wasn't said by the cat), but the TV series forced to change him to a talking cat with a quite a caustic humour.

The result was that many of us remember Heathcliff's adventures as funnier: how he managed to steal from the fishmonger or how he confronted the neighbour's dog or how he got intro trouble when he went out with his new girlfriend Sonja (a cute white kitty that always wore a pink bow). In that time, Garfield's antics seemed slower and insipid in comparison.

Nowadays, and despite the fact that his TV show is a thing of the past, Heathcliff is still published in many newspapers and his cartoons are easy to find on the Internet. George Gately no longer makes them, his nephew Peter Gallagher is now in charge. So it seems that this orange cat will still have many more adventures. Perhaps he is not so famous as his cousin anymore, but he keeps fit…and he has a large amount of fans ready to scratch his head.