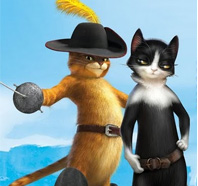 You must know "Puss in Boots" from Shrek, and there were rumours that a film was being made about him. Well, after a long wait, it's finally here: a full feature just for him, where he tells us his adventures before meeting the ogre. Specifically, the one that took him to be part of the scheme to steal the goose that laid the golden eggs.

And he won't be on his own: he will team up with Humpty Dumpty (an egg-man) and Kitty, a seductive black pussy cat. You might well imagine that they will meet all sorts of trouble and dangers in this charming and funny fairytale world, which we already experienced in the Shrek series.

As usual, you will also be able to enjoy this movie in 3D (be careful with stray cat scratches) and IMAX versions. Big style!

A film made to have a good time. However, we recommend you read the original story "Puss in Boots", because you know how exaggerate films can be about these things.

How can we help you?Speak with an advisor for personalized attention
Receive Information
“November Joke”
Rats and bats
[Read joke]