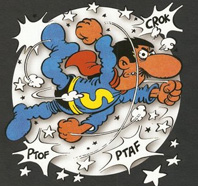 He might not have been the first "hero" of Spanish comics, but he probably was the first "superhero" in Spain… and that's what he has remained.

Super López (López simply because it's one of the most common surnames in Spain) was born in 1973 from the trace of the pencil of Catalan drawer, Jan, (whose real name is, precisely, Juan López), after he was commissioned to create a parody of Superman. Initially, this character was going to be the protagonist of short stories and illustrated sketches. But Jan realised Super López had an amazing potential.

So he took a portion of the mythology pertaining to Superman, and adapted it to the comical universe of Super López. While Superman was really called "Kal-El", Super López is called "Jo-Con-El" (which in Spanish is akin to tutting "that guy, again"); while the man of steel was born in "Kripton" the Spanish version originates from "Chitón" (meaning "Silence" in Spain). Our Super did not fall into a barn in Kansas, but was raised with the López family, a married couple in Barcelona.

López is a journalist, and he disguises as a human simply by wearing glasses. His girlfriend/work colleague is Luisa Lanas (in the mold of Louise Lane) and the photographer that accompanies them in their adventures is Jaime González (a Jimmy Olsen of sorts).

Additionally, Jan adapted part of the "Marvel Universe" to the "Super Universe": in the first issues, López was part of a "super group", formed by Spanish versions of other heroes, such as "El Mago" ("The Magician", shaped in the guise of Doctor Strange), "El Latas" ("The Tin-man", an Iron-Man of sorts), "Bruto" ("Brute", something along the lines of The Thing, from The Fantastic Four), "La chica increíble" ("The Amazing Woman", who gathered characteristics from several female heroines in the world of comic), and, one of the most famous, "Capitán Hispania" ("Captain Hispania", similar to Captain America, but dressed in yellow and red). This super group did not last long and in the end its members fought each other, so Jan decided it would be best to allow López to fight against evil on his own.

Whatever the case, the fact remains that López, though clumsy, has had a good career. In 30 years as many as 56 albums of his adventures have been published, combining the most savage parody with extreme background detail (many of the places in which Super López has been exist in reality) and many elements of science-fiction, fantasy and even typical Spanish legends.

Therefore, Super López is much more than a superhero: he is part of the culture and the character of a country that is capable of laughing of itself.

How can we help you?Speak with an advisor for personalized attention
Receive Information
“November Joke”
Rats and bats
[Read joke]