How are 3D films made? 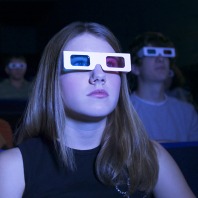 Surely some time or other, while watching a 3D film and unconsciously dodging an object thrown to the screen by the main character, you've asked yourself: How are 3D films done?

The effect is achieved by somewhat mimicking our natural way of seeing things. If you cover one of your eyes and leave the other open, you'll notice how they both focus on the same object from different perspectives. The 3D cameras do the same thing: they use two lenses to film the same object from two different perspectives. The camera system is slightly more complex than our vision: the lenses are not close together like our eyes. One of them focuses on the object while the other, placed on top of the first lens, focuses on the floor. Between them there's a translucent mirror that, to put it some way, joins the two recorded images, creating the superposition effect we see when we take our 3D glasses of.

What these glasses do is join both images through the polarization of the lenses. Easily explained: the lenses (they're really plastic) are treated a different way from the normal lenses. One lets the light through, and thus the images, vertically, while the other lets them through horizontally. Our brain, trying to create a coherent image, creates the third dimension. It's similar to the method used in tinted car windows.

As you can imagine, this system is based on the assumption that we all have a perfect vision, but our own sight plays a big role in the creation of the image. This is why some people see the 3D better than others, and why sometimes short-sighted can't see the 3D effect and only end up with a huge headache.

Most of the specialized technicians agree that the current system is not the best one, and they're investigating in improving perception through electronic methods so it can be applied to cinema screens and TVs. So it's just a question of time until we will be able to enjoy a purely three-dimensional movie without having to buy a set of glasses each time we go to the movies.

How can we help you?Speak with an advisor for personalized attention
Receive Information
“July Joke”
The Sand.
[Read joke]

Harry Potter and the Deadly Hallows 2