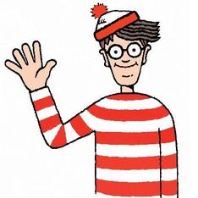 A dark haired man, tall with glasses, who carries a cane and wears a red and white striped t-shirt and a red and white bobble hat. He sounds easy to spot, but many people have been looking for him since 1987. His name is "Wally", but in the US and Canada they call him "Waldo", "Charlie" in France, "Walter" in Germany, "Holger" in Denmark, "Uolli" in Russia, "Valle" in Sweden and "Wori" in Japan. We guess this makes him even harder to find.

This special character, which stars in many illustration books in which he gets mixed up with people of all classes, conditions and times, was created by the pencil of British illustrator Martin Handford. Curiously Handford, influenced by epic and war movies, began drawing battles with many different characters in different positions. In 1986 he started working as a freelance illustrator specialized in groups. He was commissioned to draw a very peculiar character: a time traveller which served as link between different settings within the same book.

The project ended up as the first book of the series "Where's Wally?" and up till today there are seven volumes and an enormous amount of merchandising with his image, including video games. In 1991 and 1992 he even had his own TV series, with 13 episodes whose arguments went, of course, beyond searching for him in crowds.

Wally is not one of those people that gets lost on his own. With each one of his adventures his circle of friends has grown, and we count among them Woof the dog and Wizard Whitebeard. He's also found a girlfriend, Wanda and an arch nemesis who looks very much like him, only he dresses in yellow and has a moustache. His name is Odlaw (Waldo backwards).

His books have become super sales, his face is famous, but Wally is still modest. The proof is, despite his fame, he's hardly ever spotted.

How can we help you?Speak with an advisor for personalized attention
Receive Information
“July Joke”
The Sand.
[Read joke]

Harry Potter and the Deadly Hallows 2