Why do earthquakes take place? 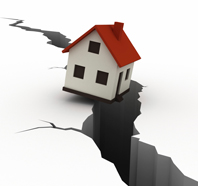 We have all seen in the news or films that an earthquake can destroy cities. But why do they occur?

Picture the cortex of the earth as a jigsaw puzzle made of twenty pieces. Each one of those pieces is what we call a "tectonic plate". These pieces move very slowly over an ocean of magma (like volcano lava), "floating". As they drift, it's normal that their borders will clash against one another. The friction of this clash releases energy, which spreads over the plates and eventually reaching the surface.

When the information about an earthquake is given, something called "epicentre" is always mentioned and its intensity in the "Richter scale" What to these words mean?

Let's begin with epicentre: it's about the point in the cortex of the earth that is exactly above the "hypocentre" (the low point in earth where the earthquake originated). Usually the place where the epicentre is suffers the most damage.

And the Richter scale? Even though it seems to measure the intensity of the earthquake, what it truly measures is the degree of destruction it produces. Those with intensity "1" will only be detected by seismographs, 2 and 3 shakes some hanging objects, 4 makes books fly from the shelves and breaks glasses, and so on until the 12th degree, when cracks in the ground appear and heavy objects fly through the air. Given that it doesn't measure something quantifiable it's not a truly reliable scale and all it does is give a lot more drama to the news about earthquakes.

So now you know a bit more about earthquakes. However, as usual, we invite you to carry on investigating about the subject. It never hurts to know more about the world that surrounds us, and in this case, that shakes it.