In Reality, What Was the Star of Bethlehem? 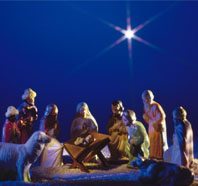 The story goes that a star stopped right above the manger where Baby Jesus was born, in order to guide those who sought to find the Son of God. In Spain, we say that was precisely the star that guided the Three Kings to Bethlehem; as a matter of fact, nativities in Spanish households all unavoidably feature the star with a bright trail above the manger.

But did the star of Bethlehem really exist? It is said that every legend has an element of truth and many researchers have put their heads down to try to explain what, in reality, might have been the star of Bethlehem. In what follows, you will read some of the theories.

Comet: this is one of the most widely accepted theories. Some have even speculated that it might have been the famous Halley comet. Nevertheless, specialists claim that back then, the Halley comet could only have crossed the skies 12 years before the birth of Christ. Hence, either we have the wrong comet or we have made a mistake measuring our time.

Supernova: Once a star dies, it releases an amount of light that often is brighter than the galaxy that harbours it and that lasts for a long period of time. Might the Three Kings have seen a supernova? Once again, there is the issue with dates: the nearest supernova to have taken place near the time of the birth of Christ happened 185 years earlier.

The conjunction of Venus and Jupiter: This theory was raised by the astronomer, Johannes Kepler, in the XVIII century: he claimed that Jupiter and Venus were aligned in the sky, combining their glow on the night sky three times within seven months in the year 6 BC. Presently, this theory is highly esteemed, given that, due to various changes through history in the reckoning of our calendars, it is likely that we have erred by three to six years in the date of the birth of Jesus.

Aurora Borealis: Aurora Borealis (beautiful curtains of light on the skyline) occur when the solar wind collides against the magnetic field of the Earth. The problem is that this phenomenon can only be seen in the North and South Poles (in the latter it is known as the Aurora Australis). How could this phenomenon be seen in the Middle East? The auroras have been studied again recently, and it seems they could be due to magnetic storms unrelated to the poles or the sun. Could auroras take place elsewhere, then? It is still unknown, but some people say they can.

Spacecraft: Yep – you heard it right. Many enthusiasts of tales of flying saucers, UFOs and the paranormal believe the Star of Bethlehem might have been an alien spacecraft nosing around in the right place at the right time. Evidently, most people don’t take this theory seriously – they say it fits beautifully as a sci-fi fiction, but no evidence is around to suggest that this is the way things happened.

Naturally, some people say there was no star of Bethlehem at all, and that this is just a metaphor or a symbol of spirituality. Be that as it may, Christmas would certainly be a bit darker without the giant star!