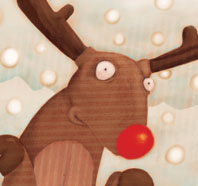 This time of the year, many TV channels broadcast Christmas specials. You must have heard of some character with a cold whose nose "looks like Rudolph's", or seen a cartoon of a reindeer with a red nose. Both images are related to this month’s character.

In some sense, the story resembles that of the ugly duckling: Rudolph is a reindeer whose nose has been turned into a red glowing bulb by a capricious little fairy. His father, Santa Claus' head reindeer, manages to disguise the ‘defect’, fearing what the others will say about his son. The make up doesn’t last too long, however, and Rudolph's round, bright and red nose is soon exposed, triggering the scorn of all the other reindeers. Nevertheless, he carries on, convinced that he is good enough to, one day, pull Santa's sleigh.

The day finally comes, but everything is about to go to the dogs due to a heavy fog. Santa Claus is afraid that the reindeers will lose their sense of direction caught in the wind and the clouds… but Rudolph realises he can save the Christmas due to his strange gift: if he is placed at the front of the sleigh, he can use his nose as a torch and guide the rest of the team. That is precisely what happens, and Rudolph becomes the hero of all reindeers.

A lovely fable, with a worthy message, as you can see: we can overcome any difficulty if we put work and determination to it, and we can even turn what we believe to be our shortcomings into our advantage.

The funny thing about Rudolph's story is that, strange at it may seem, it is not a classic: it was written in 1939! Its author, Robert L May, created the character when he decided to produce himself the drawing books for his children. His intention was to save some money, but since the children liked the character, he decided to publish the story worldwide. Soon thereafter, Rudolph became famous… and he even got a Christmas carol!

Nevertheless, the popularity of Rudolph has not gone far beyond America. How come? We don'’t know, but we invite you to find out more about him and even to look up the Christmas carol or the film about him… as well as learning about the character, this will help you to learn some English!