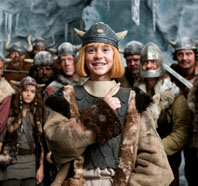 The smallest, but also the most ingenious, Viking in the world returns to our screens with a great adventure and a tough mission: saving his father from the clutches of Sven ‘The Terrible’, who wishes to seize control of the town by all means.

Added to this, Vicky will have to lead his father’s crew: a group of mad Vikings, each weirder than the next. This will threaten to turn his mission into total folly. Will the most ingenious Viking child of all time be able to cope with all these tasks, and, through it all, will he be able to protect the treasure of the Gods?

Obviously, he is not lacking on experience. There where you see him, Vicky has been saving his friends’ skins since 1974 (37 years, no less). No doubt, your parents will remember the cartoon and its song… Come to think about it, you might even be able to convince them to take you to watch the film by telling them that with it they might remember the times when they themselves were children!

Who else is up for sailing the wild seas of the north aboard a Drekar?