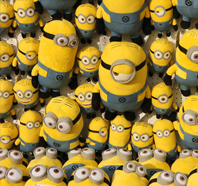 Minions are those little yellow rascals with squeaky voices. If you still don’t know who or what we’re talking about, let us tell you all about these funny little creatures.

Minions have existed forever, since the beginning of time, and they only have one objective: serve the most villainous masters they can find. They look like little yellow pills, but each one has a different look and personality: some are taller, some are skinnier, some have just one eye… But they always dress in the same way: glasses, jean overalls and black boots.

They like fruit and especially bananas, and they’ll stop whatever they’re doing to get one. In fact the way they show that they really like something is by repeating “banana” over and over again.

They speak their own language called Minion Gibberish or Minionese, and although it may seem like it doesn’t mean anything, they use words from different real languages mixing them with random letters and onomatopoeias. For example, ha dul, sae (one, two, three) are the numbers in Korean.

Now you know a little more about the Minions, and all that’s left to say is Poopaye!

How can we help you?Speak with an advisor for personalized attention
Receive Information
“September Joke”
To The Deck[Read joke]