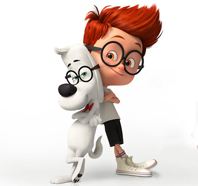 The most intelligent being in the world isn’t a person, but a white dog, Mr Peabody. He is a business tycoon, a genius winner of the Nobel Prize and has even won two Olympic medals. But he is lonely and decides to adopt a human, called Sherman. As if things were not unusual enough, Mr Peabody has built a time machine, with which he and Sherman will teach history. As you can imagine, everything gets more complicated when Sherman misuses the machine and accidentally changes history and the future is about to disappear.

The film is based on a series of cartoons that were very popular in America in the 50s and 60s whose mission was to teach history to the viewers. In Spain, it took some time for them to become famous, but you could well have seen references to Mr Peabody and Sherman in films like “Back to the Future” or in series such as “The Simpsons”.

So, should we watch the film? Well…we think the story sounds so crazy that we are going to have to go and see it out of curiosity. And also, learning some history is always a good idea!

How can we help you?Speak with an advisor for personalized attention
Receive Information
“March Joke”
Your favorite drink [Read joke]