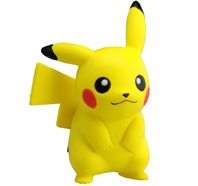 If you ask anyone, even if they have never played the game or watched the series, to name a Pokemon…the answer would be “Pikachu”. This yellow character has undoubtedly become the most famous of the Pokemon. Is it because he is both friendly and strong? Is it because he is like the pet we would all like to have? In all honesty, we do not know, but we can tell you where this character came from.

Pikachu was designed by Ken Sugimori, an artist friend of the creator of the videogame Satoshi Tajiri. Sugimori would end up becoming the artistic director of the series. He based the creation on some small animals, cousins of rabbits, called “whistling hare” or “picas”. In fact, its name comes from a mixture of the name of this animal and the sound that mice make, which in Japanese is "chū."

As you can see, Pikachu was designed to be adorable from the start. But, did you know that wasn’t always going to be the case? Apparently when the character was introduced to the heads of the company that make the videogames, they did not like it: they thought that Pikachu was “too cute” for the western market and proposed to make some changes to the design making Pikachu become a muscular giant. But fortunately, they decided to remain faithful to Suimori’s and Tajir’s original idea because otherwise, the Pokémon would have lost what makes it unique.

And the decision to leave it as it was proved to be a masterstroke: the image of Pikachu is very famous and its “Pika!” is said throughout the world.

How can we help you?Speak with an advisor for personalized attention
Receive Information
“March Joke”
Your favorite drink [Read joke]