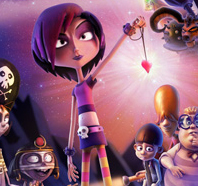 After everything that happened in Daddy I’m a Zombie (Papá, soy una zombie), Dixie’s life seems to be slowly getting back to normal.

Things are going well until her old "undead" friends Isis and Goner reappear with terrible news: the wicked Nigreda is ready to kick off the zombie rebellion against the humans and she will stop at nothing until she’s taken over the world.

This is the sequel to Daddy I’m a Zombie. We must admit that some of us on the writing staff have not actually seen the movie. Other coworkers here at the office however insist that it’s just like an animated film by Tim Burton, and that although it hasn’t earned very much attention, it’s a wonderful cartoon. These friends also seem anxious to go see the sequel, and we’re definitely not going to stop them, in fact we’ll probably be going with them to watch it for ourselves.

How can we help you?Speak with an advisor for personalized attention
Receive Information
“November Joke”
Halloween Santa Claus [Read joke]

Dixie and the zombie rebellion