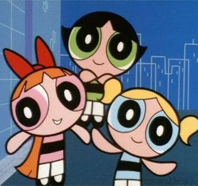 When Professor Utonium decides he wants to have a daughter, he goes to his laboratory and puts together a few ingredients to create one. In the process, he accidently mixes in a mysterious "chemical X" and three little girls are born. Each one has: a distinct personality, superpowers, and a passion for fighting evil. Blossom, Bubbles, and Buttercup are the "Powerpuff Girls"

Early in the series we see that the ingredients used to create the girls are "sugar, spice, and everything nice". There is even a pinch of truth here; Craig McCracken, the creator of the series, came up with the idea while designing figures for his brother’s birthday cake.

Craig liked the figures so much that that he decided to make a short clip about them for a TV station. They were a bit different at first: they called themselves the "Whoopass girls" and there was going to be a fourth girl. The name however seemed inappropriate and four characters were too much to work with.

Producers offered audiences a test clip of the show that was not well received. Craig didn’t give up however, making a few changes and presenting a new version. The people liked it! In fact, when it aired on TV it became the channel’s most watched program. The three stars were born.

What can we learn from all this? If you’re working on a project some day, and people don’t like it, don’t give up. Keep at it, give it a different spin, modify it, and present it again. Believe in yourself and learn from the experience!

How can we help you?Speak with an advisor for personalized attention
Receive Information
“November Joke”
Halloween Santa Claus [Read joke]

Dixie and the zombie rebellion