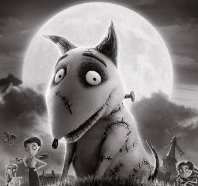 Victor is a boy with an artistic soul: he makes home movies in which the star is his dog, Sparky, which is also his best friend. But everything changes when Sparky dies after being hit by a car.

Victor is desolate, but after learning about the electric impulse of muscles, he decides to revive Sparky. Without his parents knowing, he will create a complex machine to bring his dog back to life. The operation is successful, but Spaky now looks like a dog version of Frankenstein, so it must be hid from the neighbours.

Unfortunately, and as you all know, it is very hard to keep a dog inside the house. So Saprky ends up escaping. Of course, he doesn’t know that he looks so terrifying to many neighbours. What will happen? Will Victor convince the people that his best friend is not a threat?

This is Tim Burton’s latest movie, but at the same time it is his first story. We’ll explain this: the strange director was a Disney animator in his youth. Due to his talent, the producers of the company gave him permission to film any story he wanted. He wrote a script in which a boy resurrected a dog, and so was born the first version of “Frakenweenie”: a real image short film. But it didn’t please the executives at Disney at all, they said that the movie would frighten kids, and fired Burton, who started making movies on his own.

Now it seems that the circle has been closed, for it is precisely Disney who produces the film. Have they changed their opinion on Burton or are they admitting that they blurted out the successful director of “Batman”, “The corpse bride” or “Charlie and the chocolate factory”? Well… that doesn’t matter, what we want is to have fun watching a movie that puts together comedy, horror, and friendship… and we think this one has them all!