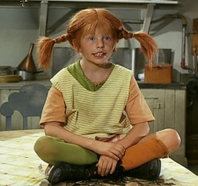 Maybe it doesn’t ring a bell so much nowadays, but in its time Pippi Longstocking (also called “Fifi Brindacier” in France, “Pippi Calzelunghe” in Intaly or “Pippi Calzaslargas”in Spain) was a huge phenomenon, a character that was adored by the girls of the whole world, specially after the constant reruns of her television series (first aired in 1969). Ask your mother for more information.

She will tell you about a red haired girl dressed in a strange way, with coloured stockings too long for her, and huge shoes. Though she is orphan of mother, and her father works far away from Sweden –he is the king of the Congo pirates- she doesn’t live alone: at home with her live a small monkey, called “Mr. Nilsson”, and a polka-dot horse called “Old man” (or “Alfonzo”).

But before she was internationally famous because of the TV series, Pippi was already a famous character in Sweden. The character was born in 1941, when the writer Astrid Lindgren was improvising a tale for her sick daughter. The story was so fantastic and fun that Lindgren ended up telling it to her visits.

Pippi’s adventures World have ended up in a drawer if it hadn’t been for an accident: Lindgren broke a leg and to entertain herself during her convalescence she continued writing the story. Her intention was no other than giving the manuscript to her daughter as a present, but the story was good, so she decided to send it to a publishing house, but it was rejected. Without giving up, Astrid sent a copy to a contest organized in 1945 by another publishing house. She got the first prize: the publication of the book. The little Pippi Långstrump (that’s her name in the original version) had a huge success. We only need to say that her 12 books have been translated to 70 languages…

What is the secret? She is an adventurous girl, confident in herself, that always sees the fun side of things, she has a chest full of gold coins… For other people, the thing goes further away: Pippi could be seen as a symbol of the liberation of women due to her strong character, her independence, and her habit of not letting anybody or anything influence her. Truth be told, it souldn’t surprise us to see an older Pippi turned into a successful entrepreneur, an adventurer in the style of “Indiana Jones” or a travelling journalist.

But, what was the author thinking? Mrs. Lindgren never thought about turning Pippi into the champion of the social struggle. She always insisted on the fact that her intention was to entertain both girls and boys.

So, if you didn’t know this singular girl, you are already introduced to her. Now you just have to read one of her stories. You will surely like them.