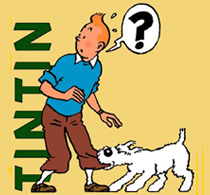 It is said that he’s the only journalist who has never been seen using a notebook or inside a newsroom. Nevertheless, the stories of his adventures are known across the world and he’s got millions of fans of all ages. We’re talking about the young and immortal Tintin.

This comic icon was born in 1929, when the Belgian illustrator Georges Remi (known as Hergé) was asked to draw a dynamic, adventurous and brave character that didn’t resemble the typical characters of children’s tales. They wanted something like a fictional journalist for the newspaper Le Vingtième Siècle.

Remi started working and he created a young journalist who looked like a mixture between a boy scout and the brother of the illustrator, Paul, who was in the military and sported a peculiar hairstyle. The only thing left was thinking of a faithful companion for the young man, and who better than a fox terrier, a breed of dog as smart at they get, and able to get anywhere he wanted? That’s how Hergé created Snowy, the only one of Tintin’s friends that appears on each and every one of his adventures.

The last thing was thinking of a dangerous mission to send him to. His first destination was Soviet Russia, and from that moment the young journalist would be sent to such exotic places as Congo, China, the fictional country of Syldavia or even the Moon. The funny thing is that Hergé couldn’t travel around the world until he was an acclaimed author, but he investigated thoroughly and to the last detail to write Tintin’s adventures.

Tintin doesn’t only have Snowy as a companion, he has several faithful friends like Captain Haddock, a quarrelsome sailor with a big heart; Professor Calculus, a clueless but genius scientific; Bianca Castafiore, an opera singer who’s in love with Captain Haddock, and the policemen Thomson & Thompson, two clueless and naïve sleuths.

Today, this singular character has become a legend and he’s influenced many. Among his better known fans you can find film directors Steven Spielberg and Álex de la Iglesia, singers like Sting or actors like Robin Williams.

We invite you to join this list. Unless, of course, you prefer Asterix (we know there are irreconcilable differences between the fans of these comics).

How can we help you?Speak with an advisor for personalized attention
Receive Information
“August Joke”
The Biclicle.
[Read joke]