Who was the most feared pirate in history? 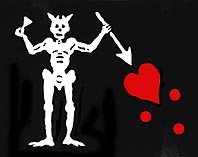 We don’t know if he was the cruelest, but he’s remembered as the scariest. He was called Edward Teach. Maybe the name doesn’t ring a bell, but if we tell you he was nicknamed Blackbeard, you’ll probably feel some unease, as did the sailors back in the XVIII century every time they heard his name.

He was described as a real demon: gigantic, with ferocious eyes, hair black as a moonless night and a tangled bear with smoke coming from within (he used to place lit wicks in it to scare his enemies). Even his crew said he’d been born in Hell: it is said that he once locked himself in with them in the boat’s cellar and set it on fire, challenging them to see who could stay the longer amidst the flames and smoke. Of course, Teach won.

The truth is that Edward was born as any regular human is, although it’s not clear whether he did so in Bristol (England), South Carolina (USA) or Jamaica. His first documented deed took place in the Caribbean, as a corsair paid by the English during Queen Anne’s War. He fought against the French until England retired from the War of the Spanish Succession, when he decided to dedicate his life to piracy.

He started out as part of Benjamin Hornigold’s crew, but he soon decided he wanted to be his own boss, so he captured a French ship, called it "Queen Anne’s Revenge" and renamed himself as "Blackbeard". He then started his piracy career, sacking every city between North Carolina and Honduras.

Thanks to the tales about his cruelty and madness and to the descriptions about his appearance and his flag (in a field of black, a demon held an hourglass in a hand, and a spear pointing to a bleeding heart in the other). Blackbeard built a formidable reputation that allowed him to gather great booty, besiege whole cities almost effortlessly and with little casualties, and form political alliances with scared governors.

However, some decided to stand up to him: the governor of Virginia, Alexander Spotswood, together with Lieutenant Robert Maynard, ambushed him in Ocracoke, North Carolina.

Blackbeard didn’t survive, but his death only fed the legend: it is said that it took twenty cutlass wounds and five bullets to kill him, and even then, after Maynard cut his head off, his body still had enough strength to swim around the boat.

Both myth and truth make the story of Edward Teach. Was he really a pirate capable of scaring the devil, or was he just a smart sailor who built himself a reputation and then took advantage of it? There’s no evidence to prove one or the other, and maybe this is what made Blackbeard a legendary pirate.

How can we help you?Speak with an advisor for personalized attention
Receive Information
“June Joke”
El burro.
[Read joke]